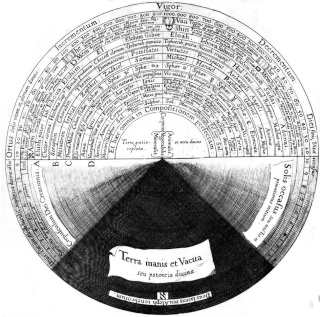 In this print Robert Fludd (1574-1637), contains the teachings of the Christian Kabbalists, is in the book Catholic Medicine (Frankfurt, 1629-31). At the bottom, which represents midnight, is written in large phylactery: Terra inanis et empty. Seu potentia divina ("empty land and empty or divine power), and the small: latens seu Deus. Tenebrosum Aleph (Aleph dark or hidden God "), with the Hebrew spelling of the Aleph. Thus, the letter Aleph is situated in the darkness of creation, God has not yet been demonstrated but is latent potential.

In Fludd engraving, after a process zone appears dark to light, which is written in the innermost band: Crepusculum Diei Creationis ("Dawn of the creation of the day") and in the outer Deus patens Aleph Lucidum. Divinae Sapientiae actus ("God manifest. Aleph light. Action of Divine Wisdom"), which begins on the day of God. Thus, the hidden order is manifested in the dinar, which Fludd calls "divine wisdom."

Kabbalah teachers think deeply about the Aleph, as it includes the mystery of creation and the core of mystical experience. For his comments appeared to indicate that if the man does not know the Aleph in darkness, nor shall know the Aleph of light, which is the name of God, the Tetragrammaton: IOD, HE, VAV, HE. So the first serious Aleph as a dark mirror, the clear, manifest God's creation.

‘In the beginning, God created heaven and earth’. ‘In the beginning was the Word’. ‘God spoke, and it was’. If any object raises the question of the relationship between science and poetry, then it is the created cosmos. Etymology indicates what was meant, even though the inherent meaning of the words is blurred in linguistic usage. The Greek poiein means ‘making’; in this sense, the product of poetry is something made, something produced through action. In its poetic process, the cosmos—the beautiful whole—is the product of action. This whole is not just beautiful on its own account; rather, it is beautiful as the result of a process which is understood as logical and poetic. Ultimately, it concerns creation through the Word.

A highlight of the artist who sees beyond the outward appearances he is able to contemplate the full manifestation in what is only potential, such as seeing a seed know the tree in its final glory. In Kabbalistic tradition, the seed is the first letter of the Hebrew alphabet, Aleph or Alef, which contains potentially all the letters and words.

In 1948, Jorge Luis Borges published The Aleph, one of the most beautiful and mysterious stories. The literary game Borges serves to create a myth that goes beyond mere literature and on the proposals of the Kabbalists. The story leads the reader to an exceptional situation, the narrator, Borges himself, referred to in the dark basement of the house of a friend an Aleph.

"Arrival, now, the ineffable center of my story starts here, my despair as a writer. Every language is an alphabet of symbols whose exercise presupposes a past shared by partners, how to convey to others the infinite Aleph, which barely covers my fearful memory? The mystics, in analog trance lavish emblems: to signify the divinity, one Persian speaks of a bird that somehow is all birds; Alanus of Insulis, a sphere whose center is everywhere and circumference nowhere, Ezekiel , a four-faced angel who at once goes to the east and west, north and south. (Not for nothing that I recall these inconceivable analogies; any relationship they have with the Aleph.) Maybe the gods do not deny me the finding of an equivalent image, but this report would be contaminated by literature, false. Moreover, the central problem is unsolvable: the enumeration, not even partial, of an infinite set. In that instant huge, I saw millions of delightful and appalling acts, none struck me as the fact that all occupy the same point, without superposition and without transparency. What my eyes saw was simultaneous: what future transcribe, because language is. Something, however, gather.

In the bottom of the step, right, I saw a small iridescent sphere of almost unbearable brilliance. At first I thought swivel, then realized that this movement was an illusion produced by the dizzying spectacles it contained. The diameter of the Aleph would be two or three inches, but the outer space was there, undiminished in size. Each thing (the moon in the mirror, say) was infinite things, because I clearly visible from all points of the universe. I saw the populous sea, saw dawn and evening, I saw crowds of America, saw a silvery cobweb in the center of a black pyramid, saw a splintered labyrinth (it was London), saw endless eyes scrutinizing me immediately as in a mirror I saw all the mirrors in the world and none reflected me, I saw in a backyard of Soler Street the same tiles that thirty years ago I saw on the porch of a house in Frey Bentos, saw clusters, snow, snuff, veins of metal, steam water, I saw convex equatorial deserts and every grain of sand, I saw a woman in Inverness will not forget, I saw the violent hair, the proud body, I saw a breast, I saw a circle of dry land in a village where before there was a tree, I saw a fifth of Adrogué, a copy of the first English version of Pliny, of Philemont Holland, I saw a while each letter of each page (as a boy I used to marvel that the letters in a volume not mix closed and lost in the course of the night), I saw the contemporary day and night, I saw a sunset in Querétaro that seemed to reflect the color of a rose in Bengal, no one saw my bedroom, I saw in a cabinet Alkmaar a globe between two mirrors that multiplied it endlessly, saw horses mane swirling in a Caspian Sea beach at dawn, I saw the delicate osadura of a hand, I saw the survivors of a battle sending postcards, saw a showcase in Mirzapur a Spanish deck, I saw the slanting shadows of ferns on the floor of a greenhouse, saw tigers, pistons, bison, tides, and armies, saw all the ants on earth, I saw a Persian astrolabe, saw a desk drawer (and the letter made me tremble) obscene letters, incredible, precise, Beatriz had written to Carlos Argentino, I saw a monument in the Chacarita adored, I saw the atrocious relic than deliciously been Beatriz Viterbo had, I saw circulation of my blood, I love the gear and the modification of death, I saw the Aleph from every point, I saw in the Aleph the earth, I saw my face and my viscera, saw your face, and I felt dizzy and wept because my eyes had seen that secret and conjectural object, whose name men usurp, but no man has looked: the inconceivable universe. "